The medical device industry involves multiple industries such as medicine, machinery, electronics, and plastics. It is a multi-disciplinary, knowledge-intensive, and capital-intensive high-tech industry. The basic characteristics of high-tech medical equipment are digitization and computerization. It is the crystallization of modern, high-tech, multi-disciplinary, cross-domain, high-tech products and high profits. Therefore, it is the focus of competition among major technological countries and large international companies. Even in the sub-sectors where the industry's overall gross profit is low and the investment is not high, products with higher technological content will continue to appear, and some companies with strong profitability will be born from them. Therefore, the general trend of the industry is high investment and high yield.

With the continuous improvement of people's living standards, the selection of medical devices will become more advanced, the product structure will continue to adjust, the functions will be more diversified, and the market capacity will continue to expand.

Compared with developed countries such as Europe, the United States, and Japan, China's medical device industry started late, its technology is relatively backward, and its market is dominated by low-end products. However, since the founding of the PRC, China's medical device industry has developed very rapidly, and the development experience can be roughly divided into Three Stages:

During the 30 years from the founding of new China to the reform and opening-up, China's medical device industry began to be in the "bud" state and gradually formed into an independent industry through continuous exploration.

The second stage of development:

During the 35 years from the reform and opening up to the 18th CPC national congress, China's medical device industry has developed at a high speed and toward a mature industry with more complete product categories, continuously improved technological innovation ability and able to meet the needs of consumers at different levels.

The third stage of development:

Since the 18th National Congress of the CPC, the party and the state have attached great importance to the development of medical devices, and encouraged enterprises to innovate while optimizing the supervision and management system. China's medical device industry is developing in the direction of localization, high-end, branding, and internationalization.

At the beginning of the founding of new China: there were only more than 70 traditional product manufacturers and medical equipment maintenance manufacturers such as knives, scissors, pliers, lathes, lathes and so on, with less than 2,000 employees.

In 1963, China's first A-type ultrasonic instrument that could be mass-produced was developed in Shantou, pushing the road of independent research and development of ultrasonic diagnostic equipment in China.

1964: "CTS-5"-the only type A medical ultrasound diagnostic product in the country was successfully developed in Shantou, and more than 30,000 units were sold in the following 20 years.

In 2014, MicroPort launched the world's first and only drug-eluting stent system-“Fire Eagle”, achieving a major technological breakthrough for local companies in the field of international cardiovascular disease treatment. With the continuous development of technology in recent years and the country's strong support for the cardiovascular field, the cardiovascular interventional device market has realized import substitution, of which the domestic market share of domestic products in the coronary stent market is more than 70%.

As one of the largest sub-industries in the medical device industry, orthopedic medical devices have also developed well in recent years. China's orthopedic implant market grew from 13.9 billion yuan in 2014 to 22.5 billion yuan in 2017. With the gradual promotion of import substitution, the market share of domestic enterprises is also increasing.

In the process of the innovation of the large-scale high-end equipment war, United imaging implements in a short time video equipment across the board to the full coverage and the core technology of the breakthrough, the independent research and development of products covering five major product lines, including nuclear magnetic resonance MRI, CT, DR, nuclear medical imaging, linear accelerator, etc.

In January 2014, MicroPort officially completed the acquisition of the joint reconstruction business and related assets of Wright Medical.

In September 2017, WEGO Group acquisition of Argon US for 5.6 billion yuan attracted widespread attention, which was seen as a continuation of a series of deals by Chinese companies seeking a foothold in the US healthcare sector. 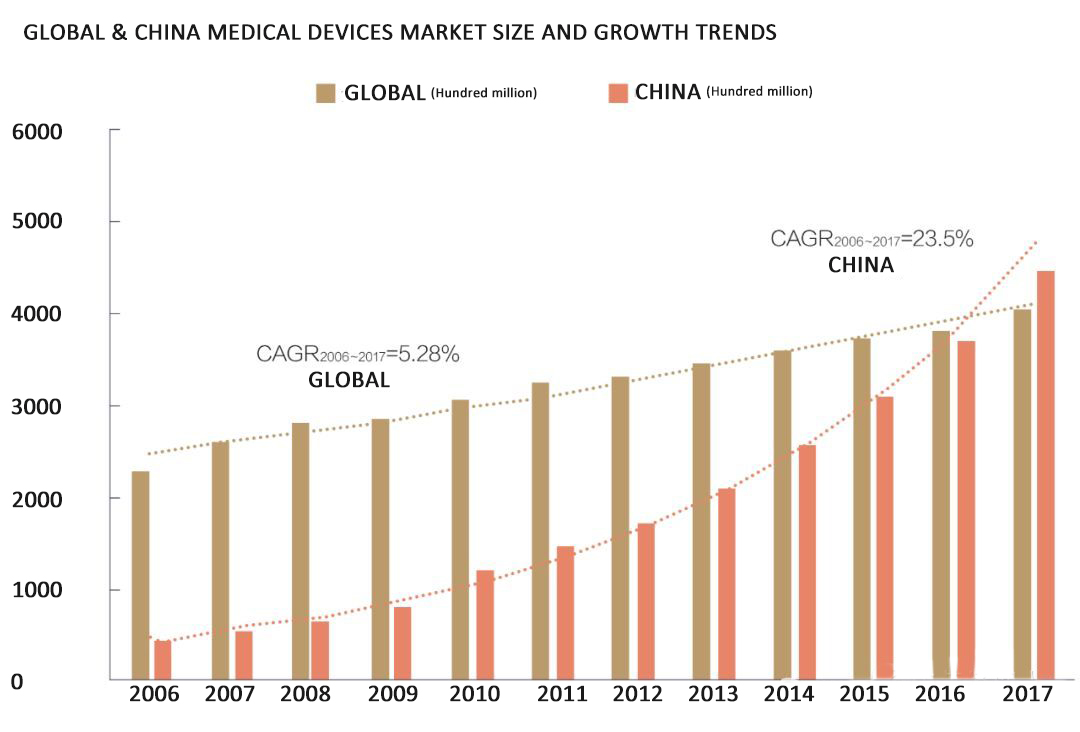 Although China's medical device industry has made some development, due to the backward manufacturing technology, the development of high-end medical devices is still far from the international level, and the market of high-end products mainly depends on imported products to meet. From the perspective of the consumption structure of medical devices, medical imaging, in vitro diagnosis, low-value consumables accounted for the highest proportion, a total of 43%. From the specific product segmentation, Ultrasonic Instruments, Magnetic Resonance Equipment, Electrocardiograph, High-End Physiological Recorder imports accounted for 90%. With the upgrading of consumption and technology and the strategic layout of the country, domestic medical device companies will realize the import replacement of high-end surgical consumables with higher added value and imaging diagnosis and treatment equipment. For a long time in the future, import substitution and globalization of domestic medical devices will be a major trend. 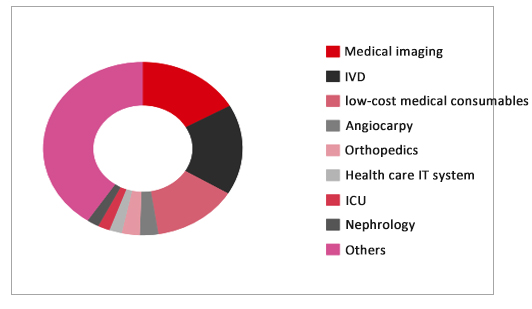 Import substitution rate of some medical equipment products in China: 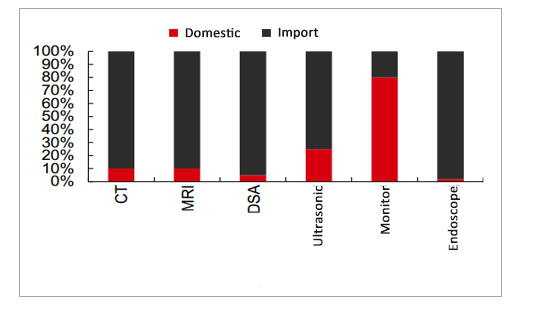 Import substitution rate of some high value consumables in China: 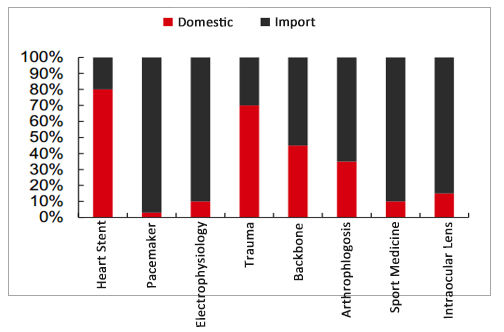 First, promote the expansion of the medical device industry from the strategic and policy perspective, and encourage enterprises to innovate and domesticate high-end products. We will encourage research and development, reform clinical management, speed up the review and approval and strengthen the life cycle management of medical devices to make way for high-quality and innovative medical devices. In 2017, the national development and reform commission made it clear that it would focus on supporting the development of five categories of medical devices, including imaging equipment, therapeutic equipment, in vitro diagnostic products, implant intervention products, and specialized technical service platform, to fill the gap in the domestic high-end medical device field and narrow the gap with the international advanced level.

Second, in the context of medical reform, the hospital has changed from emphasizing drugs to standardized diagnosis and treatment. In the context of fine management of hospital budgets, the cost-performance advantage of high-quality domestic equipment has become prominent, and the hospital's recognition of domestic equipment has been gradually improved.