You are here: Home » News » NEWS » Invisible connections will unveil the 5G future 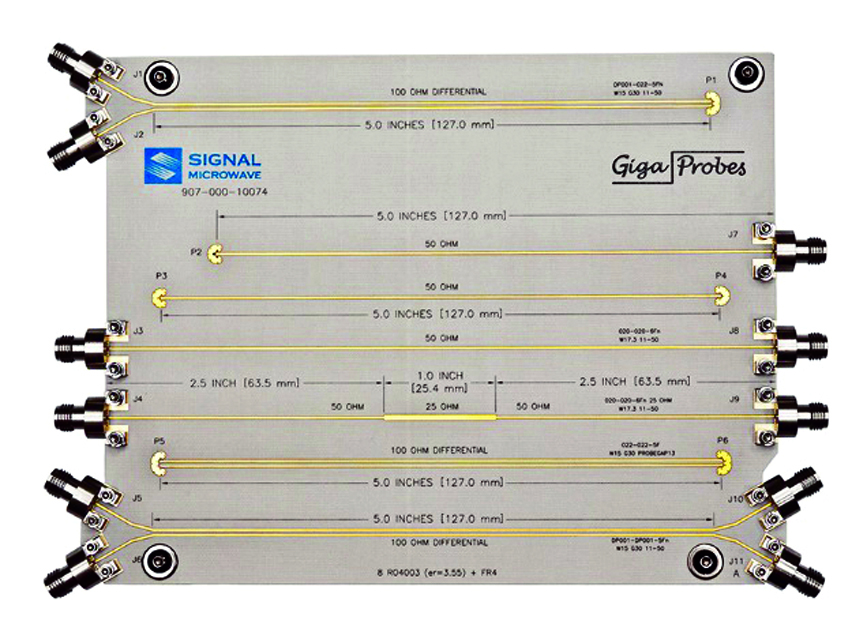 As the number of mobile users and the demand for high speed communication grows, companies and industry groups are working around the clock to rise to the challenge.

The 5G network aims to be 100 times faster than 4G LTE and increase broadband connection speeds 10-fold. There are a lot of moving pieces that need to arrive at the same place for 5G to move from concept to reality.

Those on the front line not only have to implement the 5G, they need to figure out everything from testing the networks to updating the interconnects in their systems.

The details of connectors are worthy of significant R&D focus. These electromechanical parts are used to join electrical terminations, transferring electromagnetic energy from one transmission line to another component for transmission or interpretation.

Connector precision is critical in circuits that transmit information, especially as data transfer rates increase. Anticipating the need for optimised RF, microwave, and millimeterwave (mmWave) connectors for circuits transmitting ever higher data transfer rates will support the development of a 5G future.

Engineers working on RF connectors face a multi-faceted set of design hurdles, as geometry, size and transmission constraints must be met while matching the impedance of the connector to the rest of the transmission line. Component manufacturers have been very quick in offering products for 5G applications, but providing components that are highly optimised is where the opportunities lie.

As the frequency increases, maintaining the impedance becomes more complex, as small quirks arising from the geometry or selected materials can be magnified.

The emphasis is on how these critical pieces of RF infrastructure can be further optimised through the use of simulation for customers that include engineers developing high frequency applications for the communication sector, commercial market, and military, from 40GHz to 110GHz.

Multi-physics simulation has enabled the team at Signal Microwave to swiftly meet the design challenges that accompany each new customer. The software can interface with other design tools to allow the team to rapidly develop optimised connectors that meet the individualised requirements of a diverse range of industries. This approach reduces time‑to‑market, overall development costs and required investment, allowing device designers to focus on other critical aspects of the design, knowing they can safely rely on the connecting components.

Simply stated, the designer of an electrical connector takes a mechanical part and turns it into a transmission line. The goal in designing an RF connector is to build a part that is electrically invisible, making it indistinguishable from the rest of the transmission line, which means meeting minimum requirements for resistance and energy loss.

Simulation offers a way to do this before fabrication and testing.

For customers requiring a specific geometric parameter for one part of the connector as well as a predetermined impedance, which then inform the rest of the design, a holistic approach to connector design is adopted. This involves considering the requirements for the circuit board and device in their entirety before beginning the design of the connector. 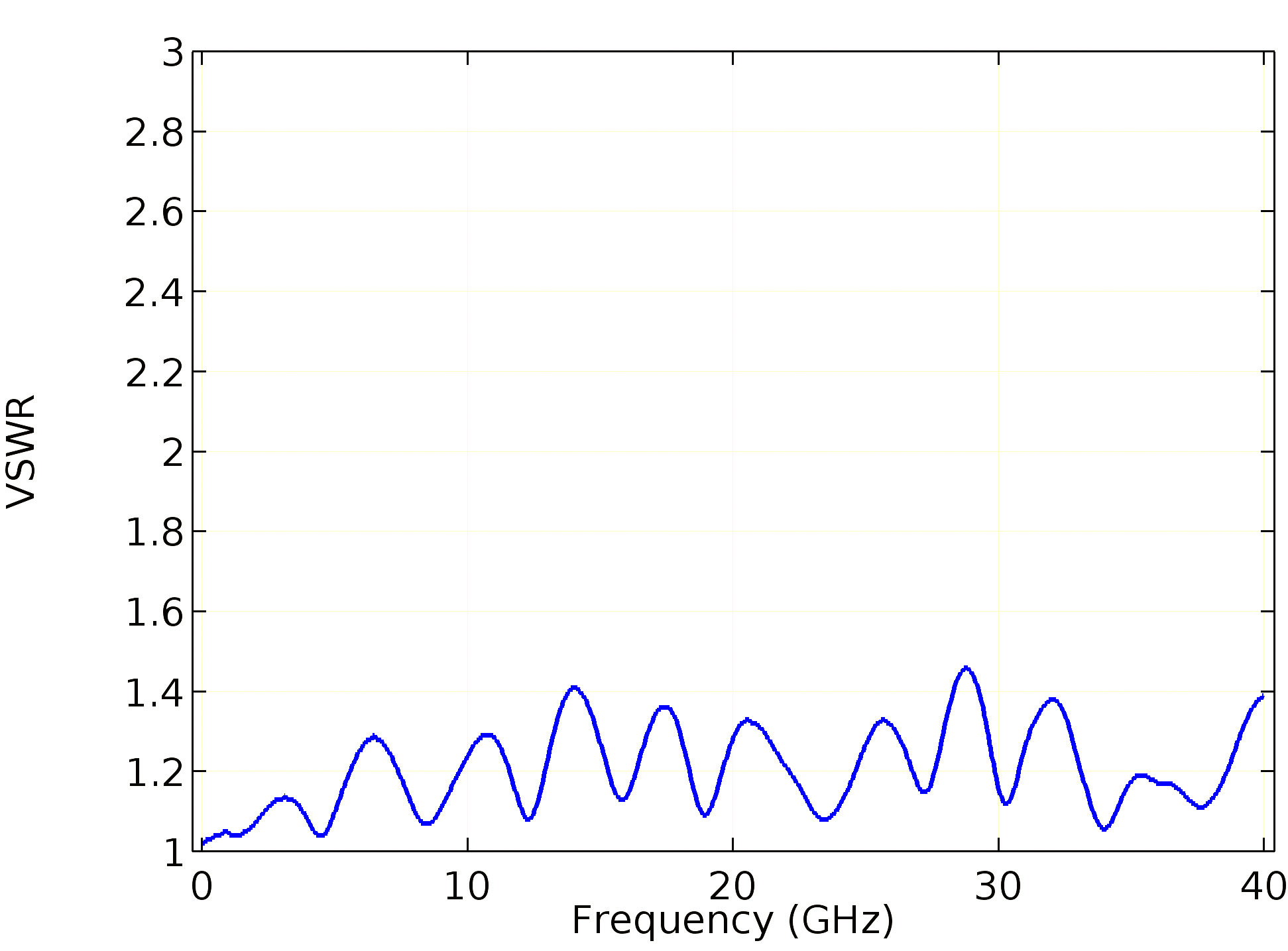 The team typically begins by building the geometry in Solid Edge and importing it into Comsol Multiphysics software, where they can use the RF modelling functionality to analyse and optimise the design.

Simulation allows the measured voltage standing wave ratio (VSWR), reflection and insertion loss to be investigated, or power loss due to mismatches or unexpected discontinuity, which must be minimised, to be identified.

For example, the measured VSWR of a test circuit board with Signal Microwave components matched simulation results and was found to be less than 1.5:1, indicating sufficiently low reflectance and loss. 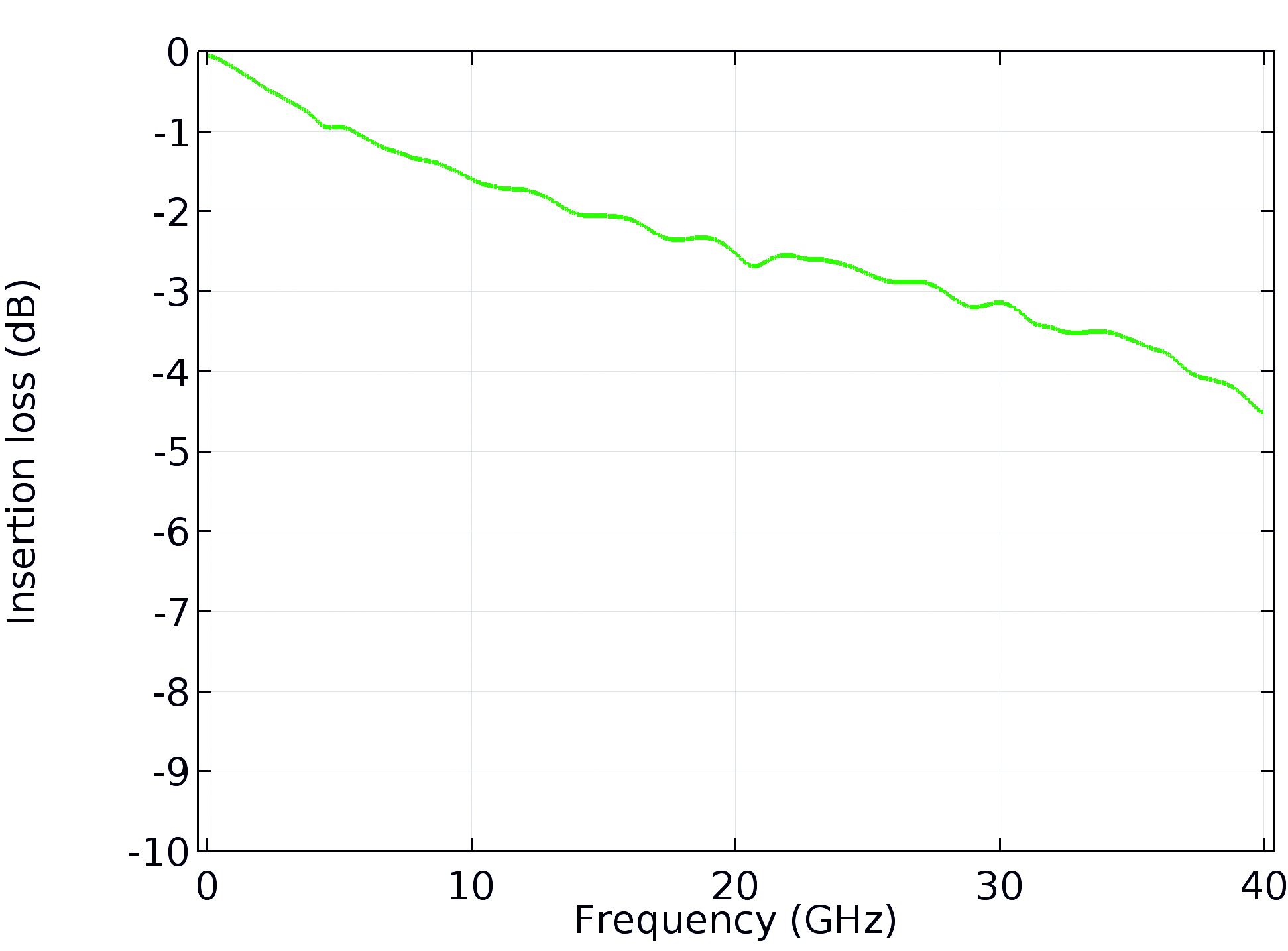 (Insertion loss, value of dB‑scaled S21, of a test circuit board with Signal Microwave components)

It was determined that the losses are not drastic, and increase gradually as the frequency goes up.

With multiphysics simulation, the team has created a portfolio of solderless edge connectors that feature minimal reflections that can be extended to the mmWave range.

Two edge-launch connectors were modelled and excited and terminated by 50Ω coaxial lumped ports. The grounded coplanar waveguide (GCPW) circuit board was built with an 8mm substrate with a dielectric constant of 3.55. Metalised vias connect the pair of ground planes of the CPW to the bottom ground plane. 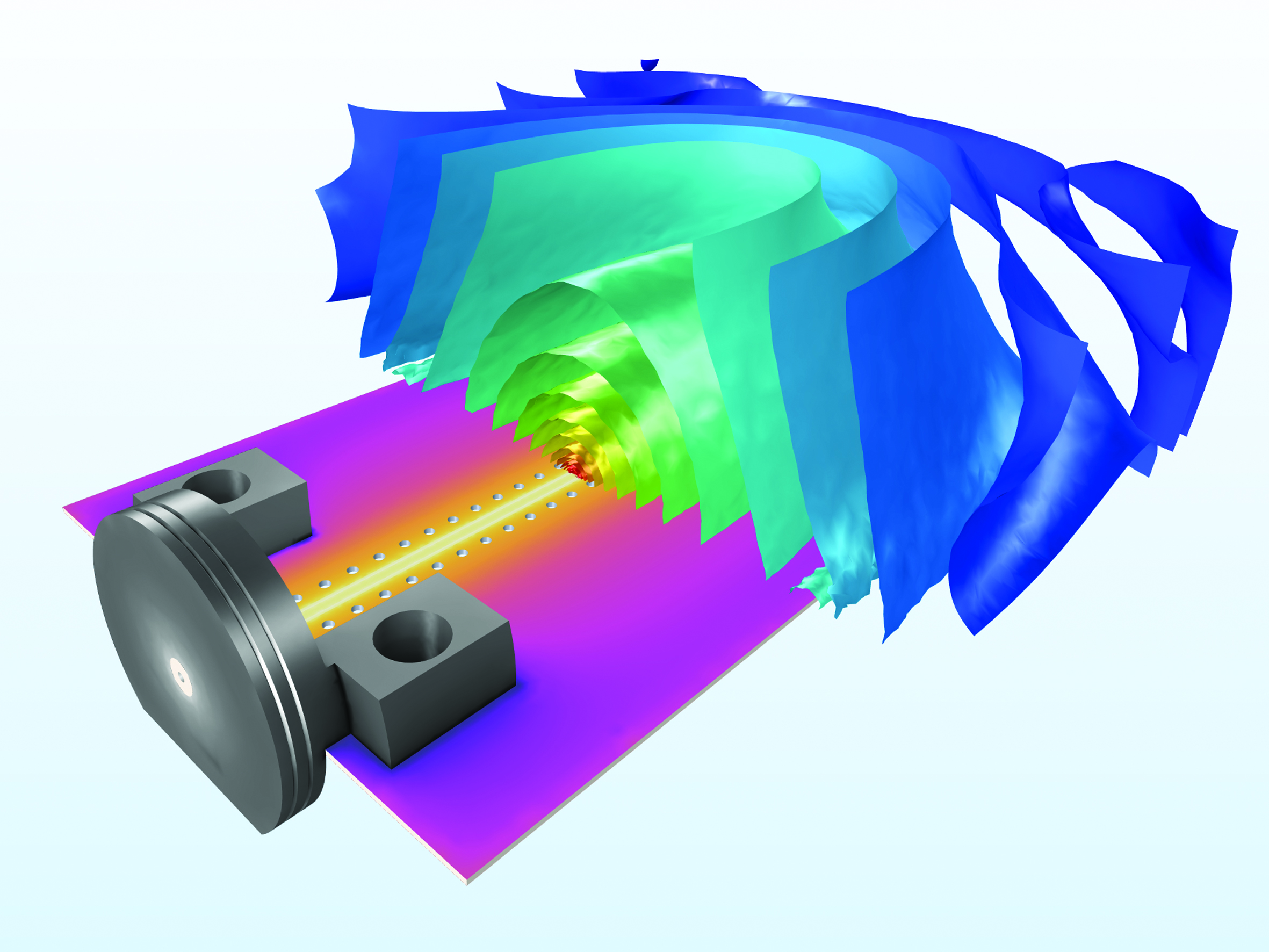 To make a connector electrically invisible, reflection is minimised, described by scattering parameters and looking at geometric discontinuities. In addition to adjusting the geometry to minimise reflection,

the dielectric materials may be optimised to obtain the desired impedance. In certain cases, Comsol will be used to evaluate additional structural design considerations, such as the minimum force required to remove the pin from the main frame of the connector.

A close match to reality

For automated test equipment, 70GHz blind mate connectors were developed, with an RF model created in software before prototypes were built. Surprisingly, the prototype connectors did not work as expected.

On inspection of the machined prototype, a small defect was found in one. Using forensic engineering, the defect was added to the original model. Following that change, the simulation matched the physical test results. You could say it was one of our ‘eureka’ moments. The result was particularly gratifying as in this particular RF connector design, some aspects which the team believes are unique were added, making them eager to see how the connector would perform.