You are here: Home » News » NEWS » What is the difference between Nylon PA66 and PA6

What is the difference between Nylon PA66 and PA6

Differences between PA6 and PA66

*better ductility (due to higher toughness)

We are often asked by our customers, if it is better to use PA6 or PA66. This goes along with the question, which differences between the two plastics exist.

PA6 (Gebamid B) and PA66 (Gebamid A) are very similar. Both plastics are partially crystalline and have the same base, but with a different order of the single molecules. Basic properties such as the chemical resistance are thus identical. Both polymers have good sliding and damping properties, good abrasion and impact resistance and are resistant to weak alkalis, grease, oils and fats.

The different arrangements of the molecules lead to light mechanical benefits for the PA66. In addition, PA66 absorbs less moisture and is therefore inherently stable. Advantages of PA6, in particular for the glass fiber reinforced grades, are a better surface finish, which depends on the slower melt solidification. In addition, the lower processing temperatures of PA6 lower the energy consumption which leads to lower production costs compared to PA66. Because of the higher moisture absorption, PA6 has an higher impact resistant than PA66.

By adding glass fibers, the mechanical properties can be improved and the operating temperatures can be increased. geba offers polyamides with glass fiber reinforcements up to 50 %. In addition geba also produces high-impact, heat and hydrolysis-stabilized polyamides in all desired colors.

PA6 and PA6.6 granules are mainly used in the automotive, electronics and electrical industry. Due to their mechanical and thermal properties and oil and grease resistance, the polyamides are applied for enclosures for power tools, pump housings, screws, gears, tanks, fittings, components in the engine compartment, fuel lines and fender. In 90 % of all applications PA6 or PA66 can be used. 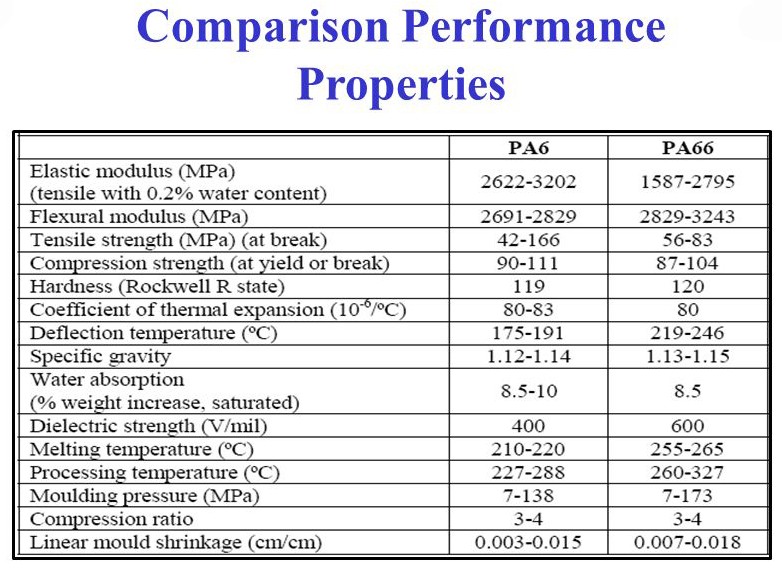